** Our concert has been postponed until the

Covid-19 situation allows us to perform.**
​

​
​​​* * Past Concerts * *
Our Christmas concerts were with Martinborough Choir: 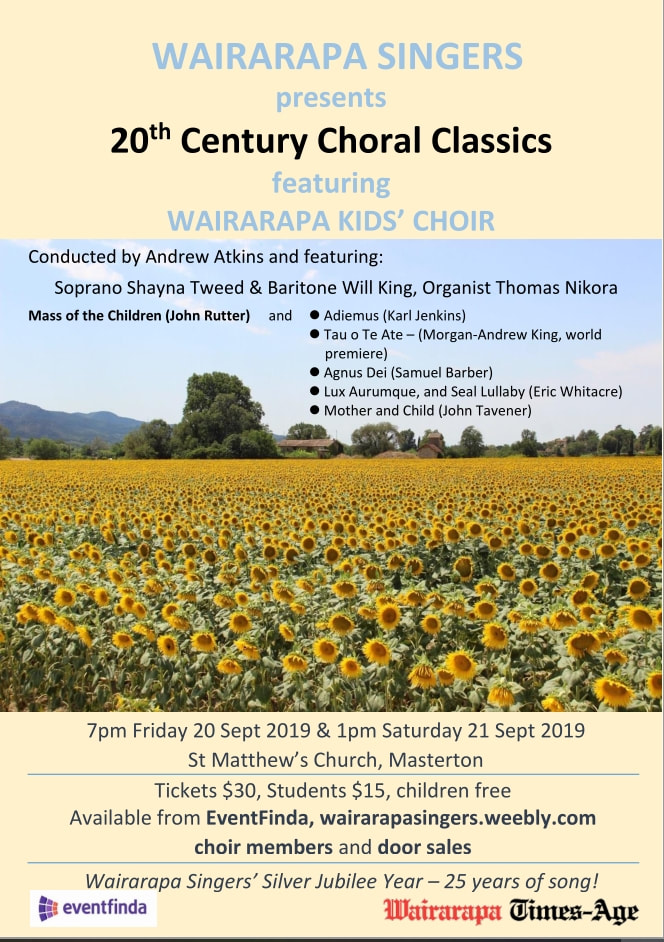 ​Our two concerts of Haydn's Creation, were a great success, both with standing ovations from an appreciative audience. One person wrote: "I went to listen to this performance tonight. It was AMAZING ! If you don't have a ticket, get one. The Wairarapa Singers took this masterpiece on and Smashed it ! The soloists and orchestra were of the highest calibre . The young musical director, Andrew Atkins is a breath of fresh air...what PASSION ! He directed and guided, his choir with ease and power. Support this choir they belong to us." Other comments from the audience: "Superb! And to think we have this in Masterton!" ** "The choir sang beautifully." ** "The soloists were incredible." ** "It was so unbelievably good that I was waiting for a flaw but it never happened." ** "The conductor was amazing." ** The musicians certainly were professionals, the music was magnificent." 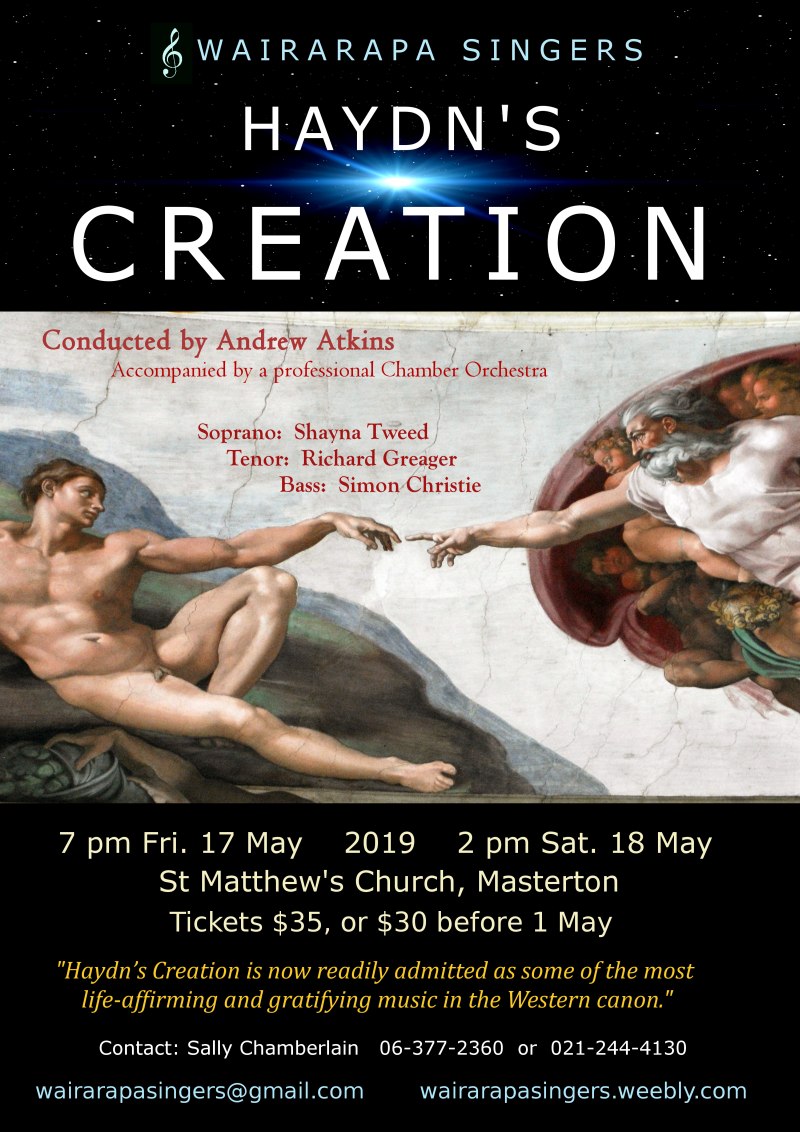 'At the Heart of Chopin'

with Andrew Atkins and Thomas Nikora

An Armistice concert to mark

100 years since the end of World War One.

​Our two Cole Porter concerts were huge successes. The 18 August Masterton concert had an audience of over 450, and our Upper Hutt concert (26 August) at Expressions Art and Entertainment Centre was sold out. Both concerts were narrated by well-known local humorist Michael Wilson as emcee. Musicians included legendary saxophone player Alex Nyman and brilliant pianist Thomas Nikora. 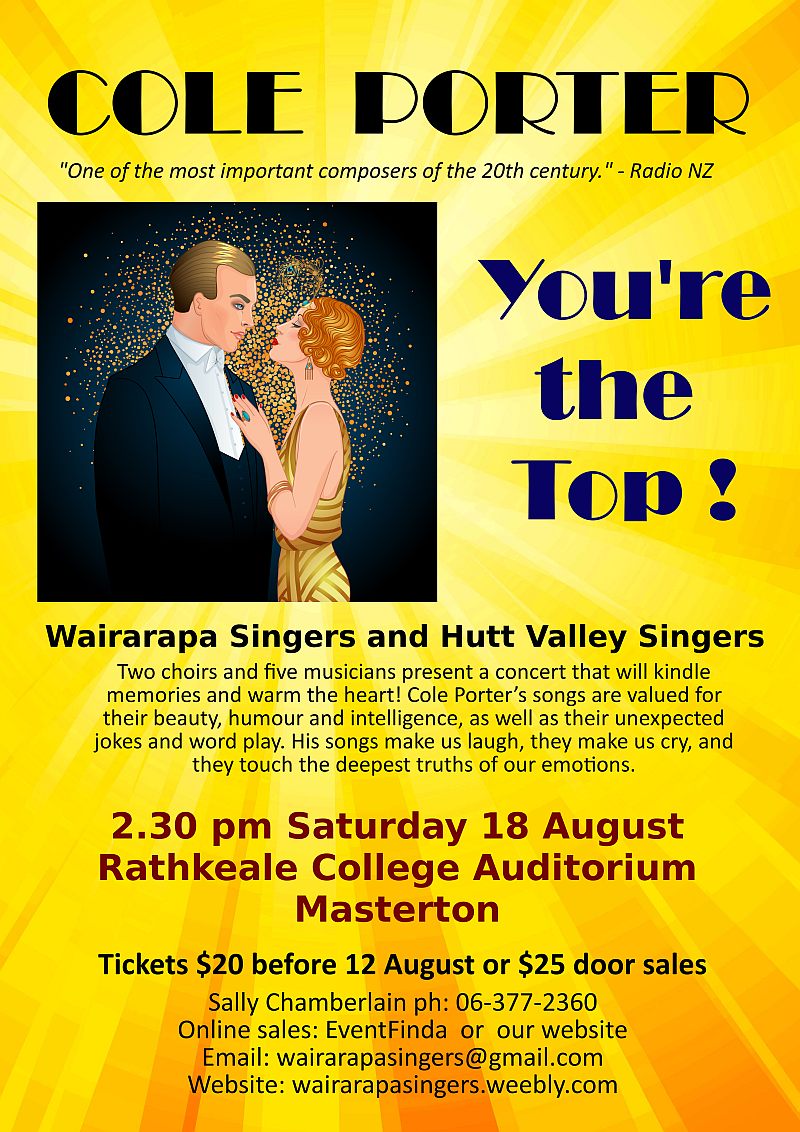 Bach's St Matthew Passion
​
With a Bach baroque orchestra, 5 soloists, a second main choir, children's choir and baroque organ, the Wairarapa Singers had two concerts on 29 March and Good Friday, 2018. A total of about 450 people attended. Many compliments were received after each performance and later by email. We are very proud to have successfully performed such a demanding  and significant work.

St Matthew Passion is widely regarded as one of the masterpieces of classical sacred music.

"St Matthew Passion presents a work of art that simply invites humanity to believe in itself and partake in its capacity to act as human beings might do when showing love and compassion for one another."
- 'Middle C' Classical Music Review, Wellington 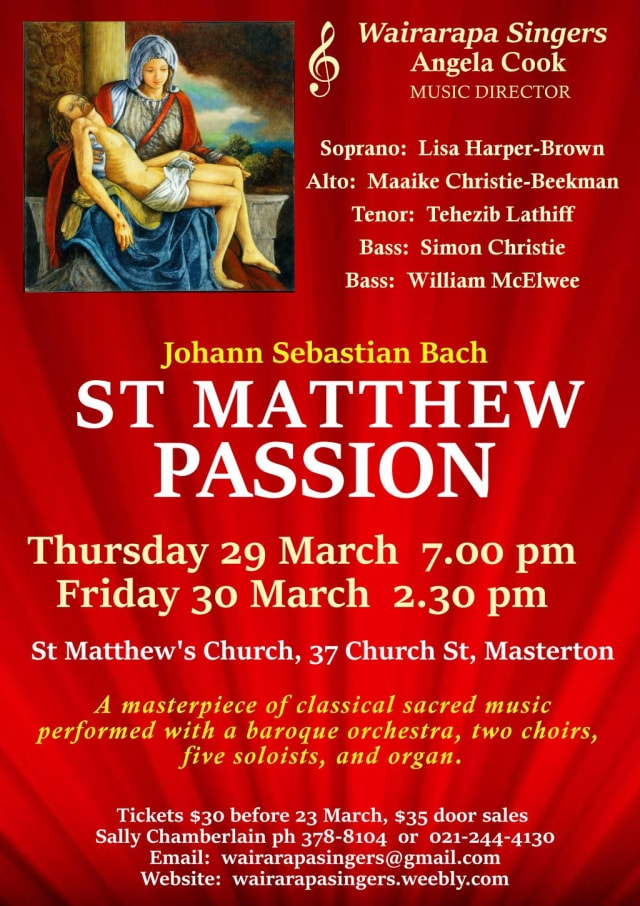 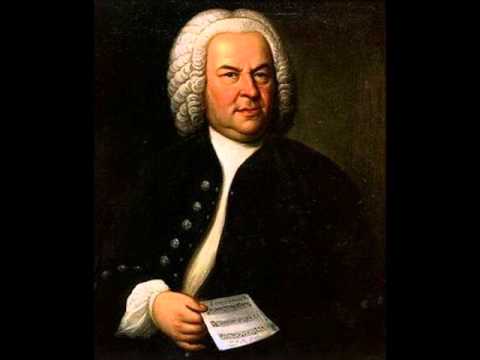 Bach's Passion continues to move audiences nearly three centuries after it was first heard in St. Thomas's Church in Leipzig, Germany. Standing as one of the pillars of Western sacred music, it is at once monumental and intimate, deeply sorrowful and powerful. The Passion begins with an immense wave of sound — an opening chorus constructed of an interlocking double choir with a children's chorus soaring over the top — building with intensity and sweeping the listener into the drama. Bach’s great skill as an artist lay in his ability to write music with supreme power to console, and it is clear that this is what he has achieved with St Matthew Passion. ​English tenor Ian Bostridge is so taken with Bach's music that he has made 'Passion' a staple of his repertoire;
"I think the St. Matthew Passion is one of the greatest pieces of music in the Western repertory." 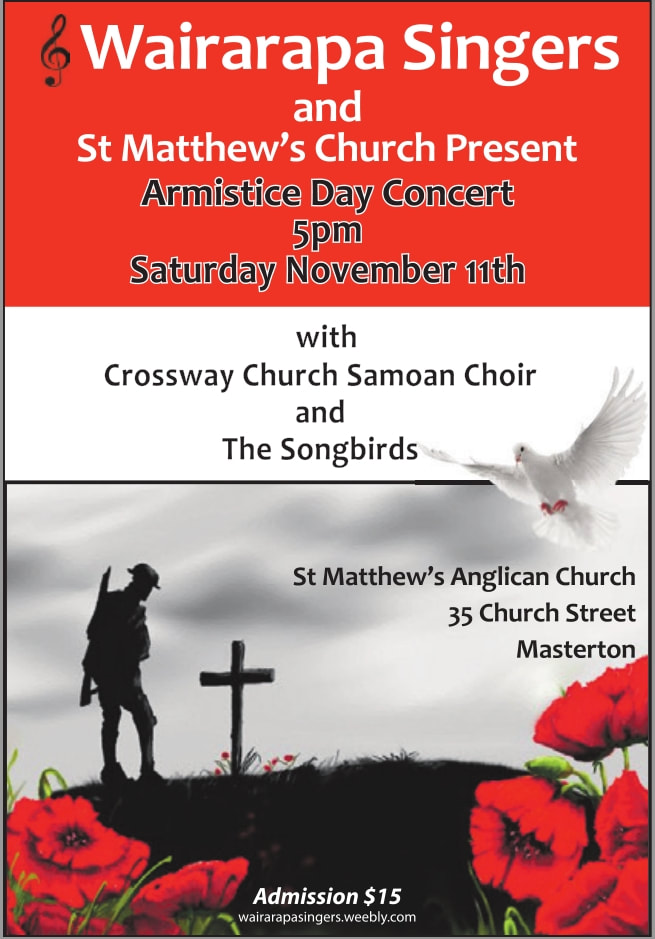 Our songs included: Three beautiful selections from Rachmaninoff's All Night Vigil, Mozart's Lacrimosa, Faure's In Paradisum, a prayer for peace by Karl Jenkins, an original composition by our music director Angela Cook,  In Flanders Fields - written for the 2013 Passchendaele commemoration from a soldier's poem, plus Canadian, American, and Samoan songs, poems, readings and more! This was a meaningful and lovely concert
​which marked 99 years since signing the Armistice that ended  World War One.

12 August 2017 - A joint concert with the NZ Male Choir and soprano Shayna Tweed.
This was very successful, with about 400 people attending at Rathkeale College Auditorium.

​"Handel takes you into another world and has this ability to uplift people, then calm them, before taking them up again. As a result, Messiah never fails."

"Whether it be on a spiritual level, or musical level, or dramatic level, there's something in Messiah for everybody."

"At the first performance of the Messiah men and women in attendance sat mesmerized from the moment the tenor followed the mournful string overture with his piercing opening line."

"Handel knows better than any of us what will make an effect," Mozart said. "When he chooses, he strikes like a thunderbolt."

"The overture brilliantly sets the mood for the rest of the parts, filling us with a sense of hope and lightness. Then Handel launches into the sublime Comfort Ye - it's Handel saying: "I'm going to make you listen, because this is a long story." 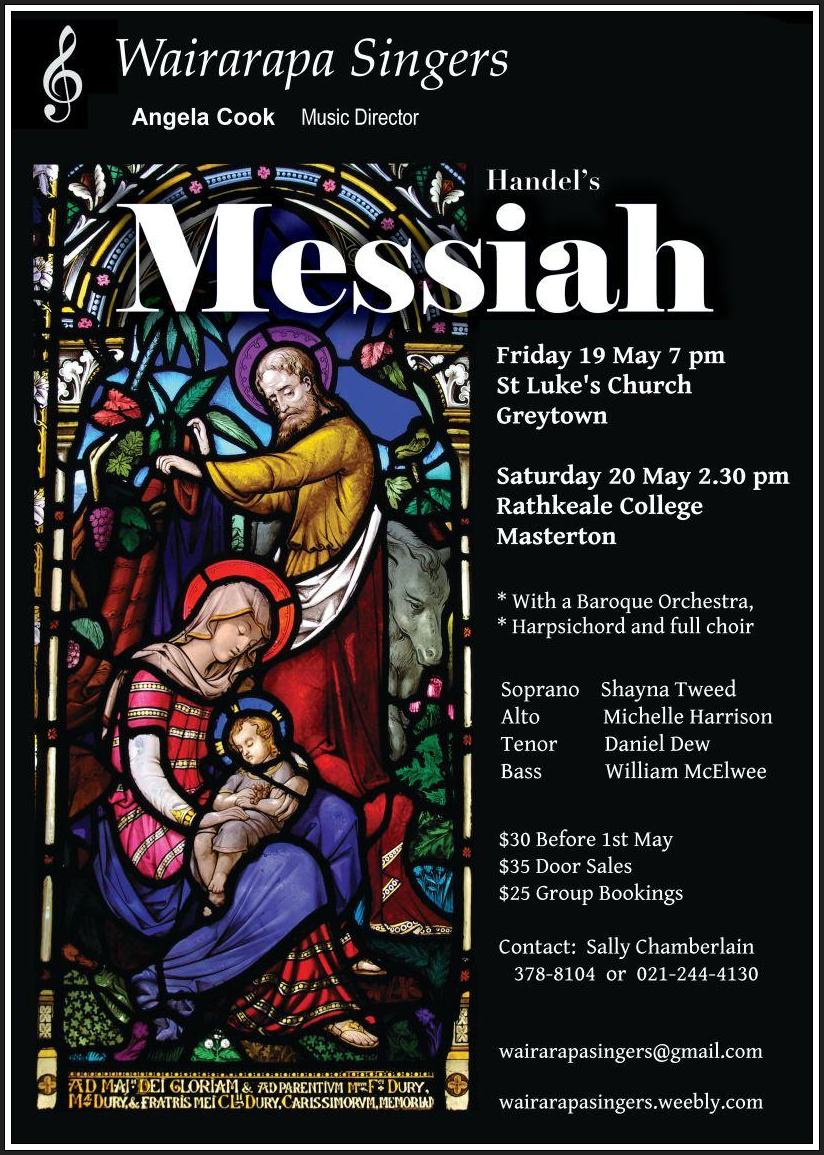 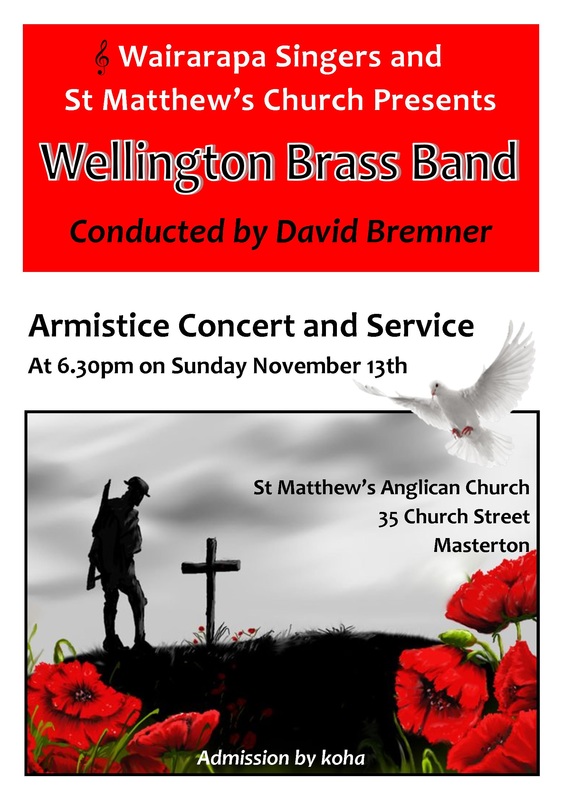 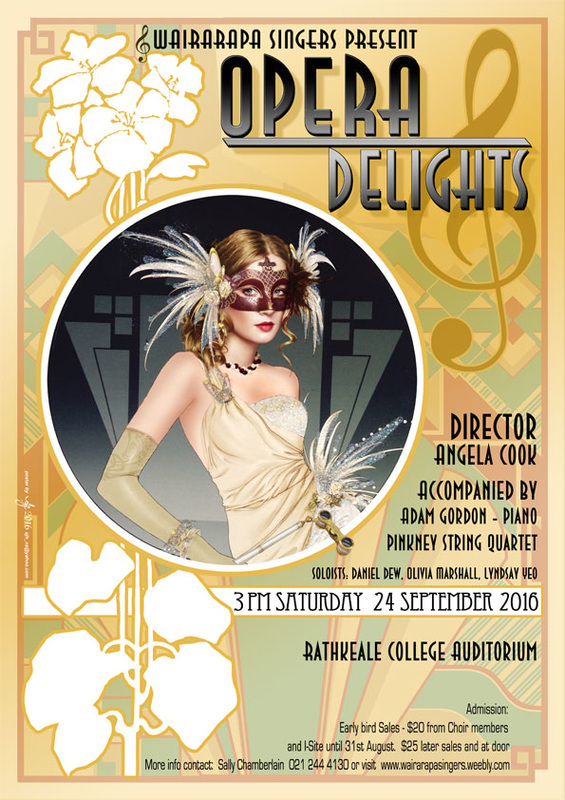 The Crucifixion by Sir John Stainer, was presented on 21 and 25 March 2016, at St. Marks, Carterton, and at St. Matthews, Masterton. Sir John Stainer wrote The Crucifixion as an opportunity for church choirs to describe in hymns, choruses and solo recitatives the story of Jesus' crucifixion with biblical references from each of the four gospels.
​ 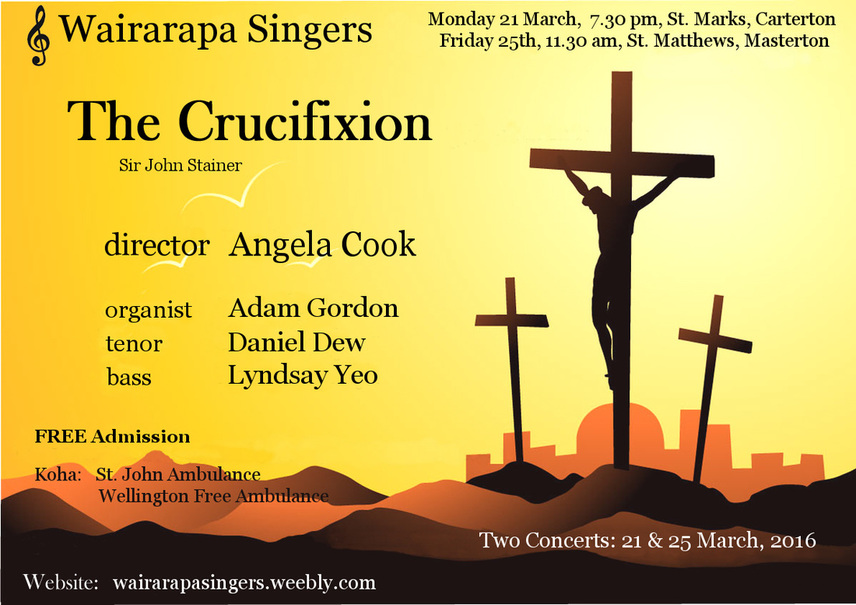 * See also the 'Gallery' and 'Past Concerts' pages